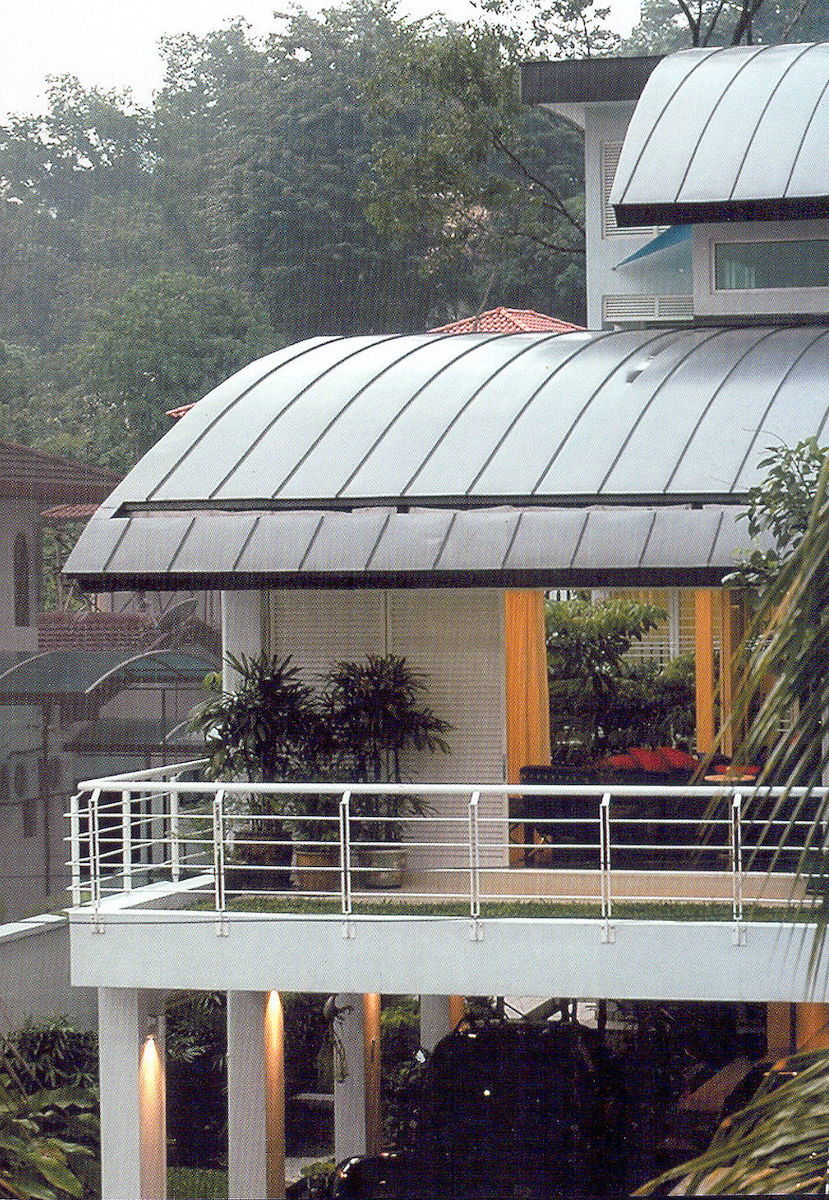 by Chin Mui Yoon of The Star Newspaper.

THE joys of tropical living lie in the abundance of “natural elements” surrounding our homes all year round, says architect Chee Soo Teng of ARC Partnership.

“We don’t need to keep our houses enclosed and insulated … day or night, we can fling open our doors and windows open to enjoy the outdoors,” he says. “A tropical house that is enclosed is such a waste!”

Chee and his family moved into their home in a quiet cul-de-sac in the suburbs of Ukay Heights in Ampang, Kuala Lumpur, two years ago. They chose the area for its abundant greenery as it lies at the foot of the lush Ulu Kelang Hills. An air of genteel elegance pervades this much sought after location, which is home to many expatriates and diplomats.

Chee’s house exemplifies the type of buildings he loves: It is an intelligently designed home with modern tropical elements that blend into the area perfectly. It has three vital components of tropical houses – overhanging eaves to shade the interior from direct sunlight, heat and glare; an abundance of light courtesy of large windows, and lots of cross-ventilation.

The original building was a standard bungalow that sat on 650sq m (7,000sq ft) piece of land. The original structure was torn down, and in its place, Chee designed a three-story house that has an unimposing frontage.

“It’s to keep the facade from spoiling the streetscape that has been established for 30 years,” he explains.

The front door leads into a work studio created for Chee’s wife, who is an artist. From here, a large staircase leads upstairs to the living room. Lots of light and greenery fill this space, and the 4.5m high ceilings do plenty to give the room an air of spaciousness.

The hall spills out into a balcony which overlooks the road and is linked to a garden area with a swimming pool.

How on earth did Chee manage to get all those lovely tropical plants – including a full-sized coral tree with bursts of scarlet blossoms – onto a balcony garden?

“The balcony only holds a waterproofed planter filled with grass. The garden beside it is on a piece of elevated land that is indiscernible from the road,” Chee explains.

The house centres around a delightful courtyard that resembles a little arboretum.

A clump of lofty Pulai and Tower trees seem to be in a race towards the sky and each soars 9-12m high, crowned with leafy tops.

The plants make a natural sunscreen for the rooms that surround the courtyard, which include the living hall, studio, study room as well as the gallery leading to the bedrooms on the uppermost floor.

Chee maximises the outdoorsy feel by opting for sliding louvered aluminium doors that open completely. The family’s two children are grown up, so there are no railings to mark the boundaries between inside and out.

Both children’s rooms have en-suite bathrooms, and open out onto balconies overlooking the pool.

The couple’s own bedroom is simple and clutter-free, as most things are stashed away in a separate area that serves as a walk-in wardrobe.

It seems most of the distinctive features in this sophisticated yet down-to-earth home were selected for usefulness over pure aesthetics. For example, the unusual roofline which consists of a simple piece of grey standing seam aluminium that curves sinuously above the structure was chosen for its insulating properties.

”It’s not expensive to have a roof like this compared to the standard tiled roofs on most homes. Those absorb heat from the sun, which later dissipates inside the house.

That’s why our houses are so warm at night while it’s cool outside,” Chee explains. His clever roof, however, has the reverse effect.

The roof’s underside is further lined with a resilient layer of foam to eliminate the “drumming’’ sound when it rains. Its wide overhangs also provide ample shade for the bedrooms and the poolside patio so it’s possible to enjoy afternoon coffee here on sunny days!

Inside, the walls are dressed with an eclectic collection of art, from classic Chinese brush paintings and fine art to works by Chee’s wife.

Furnishings are a mix of modern and traditional with plump cushioned settees, marble-topped coffee tables and an ornate antique Chinese carved wooden screen in the dining room.

The colour palette is primarily white and cream but a relaxing, chalky blue-grey tone was chosen as a feature wall to anchor the staircase.

One of the home’s loveliest features is the solid Kalimantan belian (ironwood) floors on all three floors. The wood wears a deep, rich sheen that darkens with age, and offers the comfort and familiarity that should be associated to home.

Chee’s insistence on keeping nature close at hand has allowed his family to enjoy many simple delights like feeding the monkeys which scamper over the trees in their courtyard.

They eat breakfast in the sun-bathed patio by the pool and when they’ve had enough of that, move indoors into a home that remains deliciously cool even in the hottest afternoon. What could be better than that!

Originally published in The Star on Sunday, 19th March 2006. For the original article, click here. 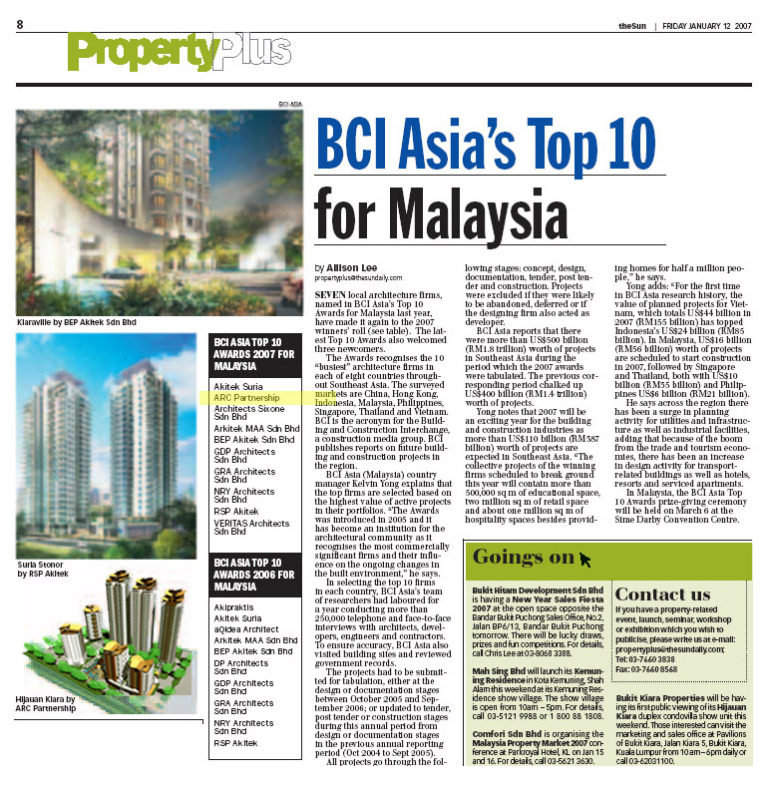 Originally published in The Sun, Property Plus, January 2007

Set within a cluster of bungalows on a landlocked hill in Taman OUG, with almost no frontage, House No.10 designed by Ar Loo Chee Keong of ARC Partnership extrapolates the volumes of the house as a direct response to its context.

This article about the Aman Kiara project in Mont Kiara was originally published in Architecture Malaysia, Volume 18, Issue 2 in April 2006. 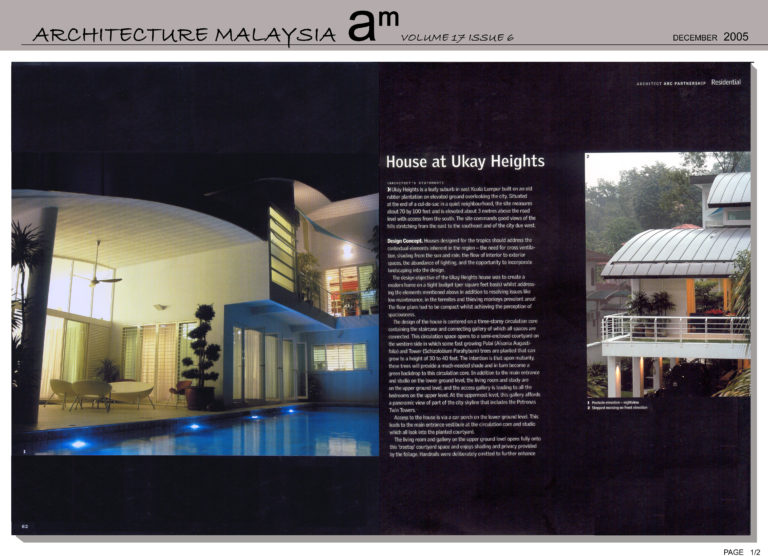 Jan 24-30, 2011, City & Country, The Edge Malaysia ARC Partnership and Akitek Jururancang (Malaysia) Sdn Bhd have taken the top spots in a master-planning and architectural concept competition for two of Naza TTDI Sdn Bhd’s land parcels in Puchong and Shah Alam, Selangor. Organised by the Malaysian Institute of Architects (PAM) and sponsored by…

This article about the Emerald Enclave project in Rawang was originally published in Architecture Malaysia, Volume 18, Issue 1 in February 2006.